ValueMantra is the best price comparison website to compare the prices of all your gadgets with best deals and offers for laptop, mobile, trimmers, appliances etc in India 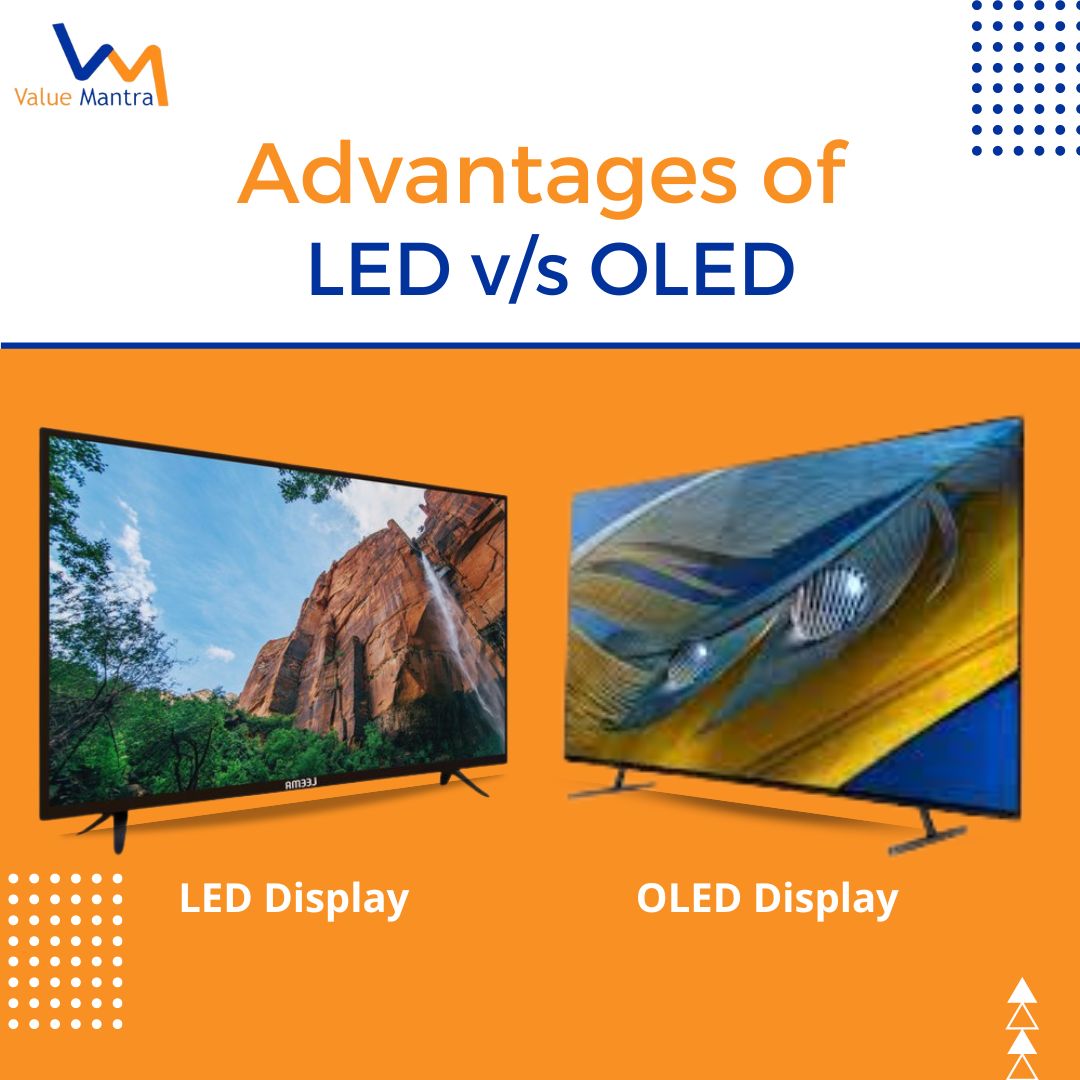 Advantages of OLED vs LED: Which Display is Best?

The latest and trending screen display in the market is OLED, QLED, and LED. When there is top-level competition between these three displays, it is hard to choose one. Which one is better? OLED vs LED or QLED vs OLED or QLED vs LED is a constant battle every new buyer is having. In this article we are going to dive deep into the advantages of OLED vs LED, let’s start!

So, to show you a clearer picture we have come up with an informative article that elaborates what is LED display is? What is an OLED display?

The basic difference between LED and OLED is the presence of the organic layer in the diode. There are two main families of OLED, OLED displays are
basically different from LED displays. LED displays are structurally similar to the p-n diode structure.

In the displays of the LED, doping is used to form p and n
regions by altering the host semiconductor’s conductivity. This
phenomenon identifies the wavelength of the emission of
photons and hence is responsible for brightness.

Have a look at the best handpicked LED display Smart TVs.

The typical organic layers p and f in an OLED display are thinner,
flexible, and lighter than the crystalline layers in an LED. As the emitting
layers of light in an OLED are lighter, and the substrate of an OLED display is flexible instead of rigid.

The contrast ratio in simple terms means that the black is truly black and the white is truly white and this particularly happens due to the self-emissive nature of pixels.

Also due to the presence of extremely thin panels, there is no need for
back-lighting. Also, the rate of power consumption is comparatively
lower than normal LED.

OLEDs have a better viewing angle, not many people realize it but the black is the most important color in the video and if the black is not black but a deep shade of grey then all the other color washes out by a certain degree hence the traditional LED TVs suffer from a degree of wash out whereas the OLEDs have the advantage in this particular context.

OLEDs have a faster response time in comparison with the other
competitors, According to LG the OLEDs have a response time that is
up to 1000 times faster than LED which puts its conservative estimates
at under 10 microseconds.

Have a look at the best handpicked OLED display Smart TVs.

Another relevant frame of reference is the High Dynamic Range
(HDR). This feature in the TV technology significantly helped in the
improvement of the picture quality, this gives an advantage of brighter
highlights and typically a wider color gamut.to add-on.

Just because a TV claims to be HDR compatible doesn’t mean it can accurately display HDR content, All the OLED TVs have the dynamic range to take advantage of HDR.

Uniformity means the consistency of brightness across the screen.
Many LCDs are pretty terrible with this like leaking lights from the
edges which don’t occur with the OLEDs.

The OLEDs are good battery-driven applications. OLED displays have found their way into many handheld products since their onset and continue to be popular in the mobile market.

In today’s date the “LG Display” is the sole manufacturer of OLED panels for Television which is infamous for its top-notch models like the CX.
The two entities Sony and LG have made an agreement that allows
SONY to install LG OLED panels into the SONY television displays.

Also, another crucial differentiating point is the input lag. This is the gap
in time between when a button is pressed on a controller and the
action in its correspondence that takes place on-screen. This feature can be
a problem when the display is introduced to a lot of picture processing
which may cause a slow down in receiving the signal.

Now coming towards the conclusion, we can claim that one type of a
the display is more health-wise friendly than the other. If a person
believes that he needs to be aware of the amount of blue light he is
being exposed with, especially towards the time in the evening, then
one could certainly say yes!

Both the kind of displays OLED as well as LED produces blue light and causes harmful exposure. But the OLEDs produce it in minimal amounts. The company LG claims that the LG’s OLED panels generate 34% blue light against the two-fold quantity of 64% produced by LED TV.

The statistics given above have been independently verified and their OLED displays have been granted an eye comfort display certification by the entity TUV Rheinland, a german based standards organization and this certainly assures us that this causes a difference in terms of its effects on health. Hence here we can state that when the blue light is a concern, one must opt for OLED displays which must be their first priority.